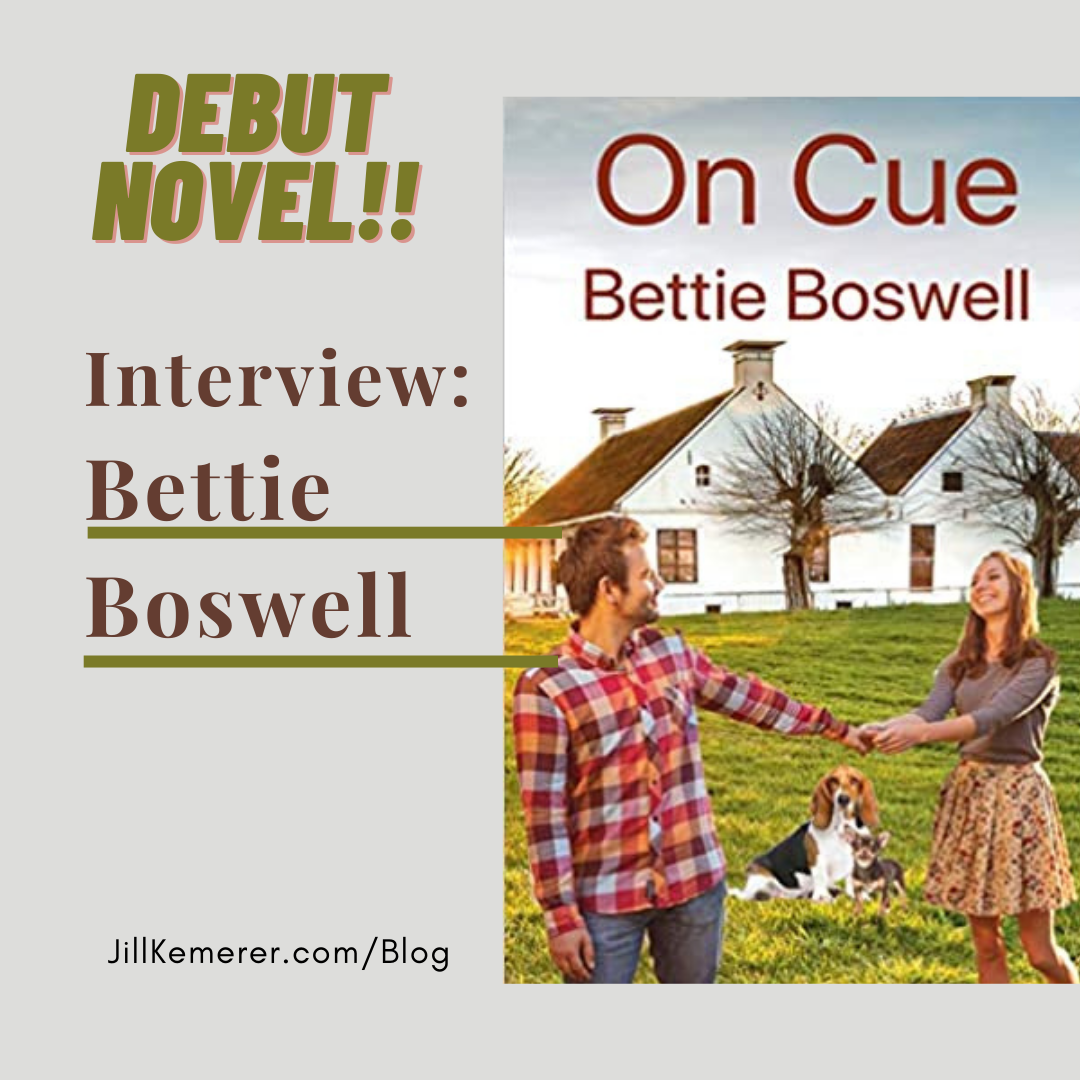 Bettie Boswell and I met several years ago, and I was immediately drawn to her warm, lively personality and intrigued by her musical background. I, personally, took seven years of piano lessons and can barely play the simplest tune! Bettie has not only spent years as a teacher, she’s also written musicals and served as an adjunct instructor for the music and art department of University of Toledo.

I’m thrilled to be celebrating the release of her debut novel, On Cue, which released yesterday with Mt. Zion Ridge Press. Congratulations, Bettie!

I am an Amazon Associate. All Amazon links are #commissionsearned.

Jill: Your life is bursting with creative energy. Between teaching, being a minister’s wife, volunteering as the music director at your church, writing musicals and spending time with your family, I’m impressed you wanted to add writing fiction to your many talents. What made you decide to write a novel?

Bettie: I’ve always loved reading Christian romance books. That love started when my grandmother introduced me to Grace Livingston Hill books. I spent several summers at her home as a young teen and she had a shelf full of Hill’s books. As an adult, my Christmas gift from my mom for many years was a subscription to Heartsong books. As I read those, I thought it might be fun to write one of my own. I started On Cue during the last few years that series was in existence. My first submission of the story ended with a rejection letter saying the series had been discontinued.

Jill: I loved Heartsong books, too! Your debut novel, On Cue, mixes your love of local history and musicals to bring two romance-shy people together. What inspired the book?

Bettie: Real life. A friend and I wrote a musical about the Underground Railroad in Sylvania, Ohio. Our musical, Just Around the Bend was produced in 2000 and 2003 at Lourdes College. Our funding came through the Sylvania Heritage Museum. We were two teachers with a dream. On Cue focuses on a fictional romance of a single teacher, but it also has a side story about producing a musical similar to our real life one. At one writing workshop I was told to write what you know. Creating my own musical and the historical research I had done in that process provided quite a backdrop for my novel.

Jill: The museum looks really cool. I’ll have to check it out! Your love of history shines through. What aspect of the novel did you enjoy writing the most?

Bettie: When I handed in the final draft to the publisher! Other than that, I also enjoyed adding humor and heart to the book during this last year. I owe a lot to my great critique partner Ann Cavera who always encouraged me to make it better and gently corrected my grammar. It was enjoyable to have a friend travel with me on my writing journey.

Jill: Yes, handing in the final draft is something to celebrate! What is your writing process? Do you plot? Or do you figure out the story as you write?

Bettie: This story has been through many revisions. I started out by just sitting down and flying by the pant-ser philosophy. In a way I had a framework in mind since I had lived through creating and producing the musical. However, the romantic story arc had to be invented by the seat of my pants. When I attended my first major writing conference, where I met you, I discovered how little I knew about the whole writing process. I went home in dismay. Several months later I pulled myself together and started taking classes and attending additional conferences. The more I learned about writing the more I went back into the story and added to the plot, character development, and setting.

Jill: I, too, was disheartened when I started out and realized how little I knew. But the key is to press on, keep learning, keep writing. And you did! It’s so exciting to see you celebrating your debut novel! Tell us where we can buy On Cue.

Bettie: It is available on Amazon and through our local independent bookstore, Gathering Volumes, in Perrysburg, Ohio.

Jill: Gathering Volumes is a great store!! What’s next? Are you working on another novel?

Bettie: I am working on another novel that will be a prequel to On Cue. I am also toying with creating stories about some of the minor characters in On Cue. I also have several children’s manuscripts I would like to see published one day. This is my last year in the teaching profession and I’ve got big writing plans for the future. Right now I’m pretty much a weekend writing warrior.

Thank you for joining us today, Bettie, and congratulations again!

As an Amazon Associate I earn from qualifying purchases.

Bettie Boswell has always loved to write. During her career as a teacher she has written everything from worksheets to musicals to articles in educational journals. Recently she stepped out of her classroom and into the world of publishing. She dipped her toe into the profession by contributing to several teacher education books and eventually wrote a leveled reader, “Side-tracked,” relating the adventure of two boys as they work for the Erie and Kalamazoo Railroad. Those train tracks still run from Toledo, through Sylvania, (where Bettie teaches,) and into Michigan. As an active member of Ohio’s SCBWI and ACFW, she is involved in critique/support groups from both organizations. She became aware of submission information for a short story collection through the Ohio ACFW group and contributed “Fred’s Gift” (inspired by the memory of her father) to a collection of tales called “From the Lake to the River.”

Her debut Christian Romance novel, “On Cue,” will be released on November 1, 2020. Inspired by Northern Ohio history, her experience as a teacher, and her involvement as co-author of a local musical called “Just Around the Bend,” (first produced in 2000) Bettie has penned a novel about a teacher, Ginny, who dreams of creating a musical to save a local historical museum. When her dreams begin to take shape she clashes with handsome drama professor, Scott. Sparks will fly as a cast of humorous characters and a couple of crazy pets keep them on their toes, while they deal with misunderstandings and seek forgiveness from their pasts.

Bettie is a graduate of the late Cincinnati Bible College (RIP) and holds a Master’s degree in education from East Tennessee State University. As a teacher she has taken enough hours beyond those degrees to probably qualify for another couple of degrees, but that is the life of a teacher. She has taught both music and classroom for kindergarten through 8th grade students. She even spent a few years teaching at the University of Toledo as an adjunct instructor for the music and art departments. During most of her teaching career she taught music and wrote musicals for her school children to perform. For her last year of teaching she has ventured into the virtual world as a yearlong online 2nd grade teacher.

She is a minister’s wife and she and her husband have served with the Village View Church of Christ in Bowling Green, Ohio since 1993. Before that she lived many places including Florida, Tennessee, Indiana, Alabama, and Virginia. She plays the piano and is the volunteer music director for the church. Each year, until Covid-19, she wrote two original musicals for her church choir.

When she isn’t busy writing, composing, or keeping up with school or church, she writes, reads, watches a Hallmark movie here and there, takes pictures of flowers on her walks to post on Facebook, entertains grandchildren, posts drawings on Twitter, attempts gardening, visits relatives in the south, attends ACFW/SCBWI/Highlights Foundation workshops, falls asleep on the couch, and takes care of her tuxedo kitty. (In case you were wondering, she doesn’t clean house very often…too busy or too tired or just doesn’t like to clean or all of the above.) Before she was a cat person, she had several basset hounds and Chihuahuas who were the inspiration for some of the antics of the dogs in “On Cue.” One of her dogs ate up a pair of leather sandals and a Bible and sat down in berries, gaining colorful spots.

In late August of 2016, I was sitting at a banquet table in Nashville when…

The Inside Scoop with Nicole Deese #WW

The Inside Scoop with Barbara M. Britton