Today we have a special guest blogger, Kariss Lynch, and she’s sharing her thoughts on love. Please join me in welcoming Kariss!

We are closing out the month of love, but for me I think it has been a month of recognition and discovery. Recently I was asked to read and review several mainstream romance novels, so this month I’ve spent my nights giving them due diligence to provide an honest opinion.

In one word: broken.

While everything about these novels met a good standard of writing technique, the romances fell short. Why? Because each author made romance about physicality rather than about relationship.

Somewhere along the way, our culture twisted romance into something superficial. So this month, I have been searching the scriptures to counter what I saw portrayed about culture in these novels. As we wrap up a month of hearts and flowers and an explosion of pink, I want to take it back to the basics.

It protects rather than demands.

It seeks to meet a need rather than an expectation.

It is more concerned with the person than their performance.

It is lasting rather than passing.

It expands past feelings.

It trusts rather than responds defensively.

It fights rather than flees in difficulty.

It celebrates wins rather than responding in jealousy.

It asks what I can do for someone else rather than what they can do for me.

It begins and end with Christ.

I remember distinctly the moment last month when I wrote about Kaylan Richards and her boyfriend, Navy SEAL Nick Carmichael as I finished up my third novel, Surrendered, and prepared for the release of Shadowed on March 3. Kaylan realizes that she loves a warrior called to something greater than himself, and he is asking her to join him on that journey. She wrestles with fear that he won’t come home, fear of being alone, lack of trust in his ability and training, and lack of trust in the men around him as he leaves her to fight for his country.

But then she pauses for a moment and begins to think of all the times when Nick pursued her when she was unlovable, when she was struggling, when she was trapped in fear. She realizes that even when she can’t trust circumstances, she can trust him because he has faithfully loved her in spite of herself. It hit me. This is love. It pursues. It sacrifices. It seeks to be like Christ.

I don’t know how Valentine’s went for you, but I can tell you that there is a love deeper than you have ever experienced and the One offering it desires a relationship with you. It is a love that will transform all your other relationships. And like Nick, this One willingly sacrificed for you. Not because He had to, but because He wanted to know you.

This is love. This is the gospel.

Thank you, Kariss, for this beautiful message. I started out writing sweet, mainstream romances, but I felt something was missing–my faith. Your post really strikes home with me. 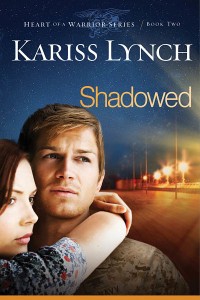 Nick Carmichael faces the demons of his past on a Navy SEAL mission to catch arms dealer Janus. Meanwhile his girlfriend, Kaylan Richards, must come to terms with loving a man who is often gone and in harm’s way. She is adjusting to life in a new city with new friends, new neighbors, and an internship. But she still wonders if she will ever find her place and wrestles to develop the strength for the future she wants to have with Nick.

As Nick and the SEAL team chase Janus, she turns the tables, attacking their families, which places Kaylan in harm’s way. When Kaylan begins receiving threatening notes and items begin to disappear from her home, Nick must learn to trust God with her life as he and his team fight for justice and answers to his past. Will light shine in the darkness, or will Kaylan and Nick’s love forever be stalked by shadows?

Want to win a copy of Shadowed?

Visit karisslynch.com/contact and sign up for my newsletter. I will choose one person to receive a free, signed copy of my new release, Shadowed, coming March 3!

Kariss Lynch writes contemporary fiction about characters with big dreams, hearts for adventure, and enduring hope. Shaken, her first book in the Heart of a Warrior series, released in 2014. Her second book, Shadowed, releases March 3, 2015. A former freelance writer, she now works as the writer for a communications ministry in Dallas.

How do you describe love?

Have a wonderful day!

Chatting with the Jills: Coffee Commercials

I'm SO excited to have Jill Lynn on the blog today! I met Jill at…

Encouragement from the Blogosphere

The Right Character to Open Your Story #WW

Last night I opened a novel I'd borrowed from the library. It didn't have a…

Copyright 2015-2020. Ripple Effect Press, LLC. All Rights Reserved. The content on this site is the sole property of Jill Kemerer. See link below.

Subscribe for Book News, Recommendations, and Giveaways!
Sign Me Up!
Copyright 2015-2020. Ripple Effect Press, LLC. All Rights Reserved. Site Powered by Total Theme.
Back To Top
×
We use cookies to ensure that we give you the best experience on our website. If you continue to use this site we will assume that you are happy with it.OkRead more